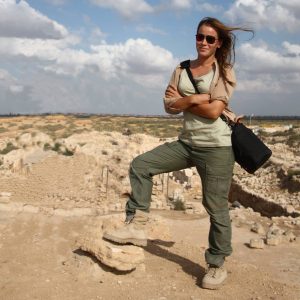 Aleksandra Pawlikowska is an archaeologist, interested mainly in Egypt and the Near East in the Late Antiquity. She is also into papyrological studies, which she finds essential in her archaeological work.

Aleksandra began her studies at the University of Warsaw in the Institute of Archaeology in 2010. Three years later she finished her BA thesis (Via Maris – a roman highway along the Levantine Coastline) and continued her studies in Master’s degree. The following year she gained six-month Erasmus+ Scholarship in Italy (Università degli Studi di Bologna). In May 2016 she defended her MA dissertation (Mosaics from Jiyeh, Lebanon: Universality of Mosaic Art In the Late Antiquity). Right afterwards Aleksandra was admitted to PhD Studies in the Faculty of History at the University of Warsaw. Her current PhD research ‘Monastic settlements in Egyptian temples’ is realised under the supervision of Tomasz Derda (head of the Department of Papyrology, Warsaw University), within the framework of the project Monks and Monastic Communities in the Eastern Mediterranean (4th-8th centuries) carried out by Ewa Wipszycka-Bravo.

From the very beginning of her scientific activity, she has been taking part in the excavations in Poland (Wilczyce), Cyprus (Nea Paphos), Lebanon (Jiyeh, Chhim) and Egypt (Tell el Retaba, Marea). She also co-worked with the Italian archaeological mission from Università degli Studi di Milano in Sardegna (Nora). She is very keen on fieldwork, and she finds archaeology to be her greatest passion.

The aim of her ongoing work is to create a database of monastic installations that can be found in the ruins of temples in Egypt. The final goal is to present a complex study of characteristic patterns of monastic settlements and their relations with the surrounding environment.